Disclosure: This post may contain affiliate links and I may earn a small commission when you click on the links, which is at no additional cost to you. Hope you don’t mind helping out a mama bear in need.

Try this easy, creamy, affordable dessert to make at home! This Filipino dessert is perfect for any occasion and can be made in no time at all! 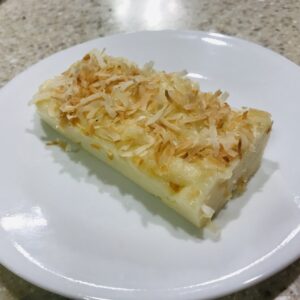 Literally translating to “white delicacy,” Maja Blanca is a dish of Spanish origin that has become a very popular Filipino dessert which is present in almost any festivity. And that’s simply because Maja Blanca is one of those recipes that is so easy to make and the ingredients are almost always available in our homes.

The consistency of Maja Blanca is thick, which is similar to gelatin and usually has a creamy or off-white color. The use of coconut milk gives the Maja Blanca a subtle yet very distinct depth of flavor.

Normally, and originally, Maja Blanca has corn kernels as part of the ingredients. However, if you know me, you know that I never ever like eating corn. LOL! I don’t even like the smell of it. (Yeah, I know. Don’t hate me. LOL!)

Anyway, since I was craving for Maja Blanca for weeks, and I promised my mother-in-law that I would be making dessert for our Sunday dinner after July 4th, I decided to introduce this easy and creamy dessert recipe to my American family.

Also, most recipes you’ll find would call for the addition of extra sugar. I prefer my Maja Blanca to be on the less-sweet side. Besides, I think the condensed milk gives just enough of the sweetness that I like.

The original Maja Blanca is topped with ‘latik’ which is a Filipino word for what coconut milk becomes when simmered under medium fire for some time. This process will give you coconut oil and some brown solids, or ‘latik’ as we call it, which is common toppings for rice cakes and other Filipino desserts.

Since I was pressed for time when I made this Maja Blanca, what I did was, I toasted some shredded desiccated coconut (or dried coconut flakes) in a pan until they’re golden brown and sprinkled them on top of my Maja Blanca. After all, that’s what’s available in my pantry.

If you enjoyed my recipe, please come back and leave a comment below, and tell me how you and your family enjoyed your Maja Blanca.